STOCKING INFO: use 1 per gallon or more. Not easy to breed, as they are actually a brackish water snail (brackish water is where they are prolific).  Excellent algae eating snail for freshwater aquariums and also Marine as well! Will NOT harm plant life. Sizes vary

-ONE OF THE BEST ALGAE EATING SNAILS YOU WILL EVER OWN!

-THEY WILL NOT REPRODUCE IN FRESHWATER!

-THEY WILL NOT EAT YOUR PLANTS

-THESE SNAILS WILL CHANGE YOUR LIFE AND HOW YOU CARE FOR YOUR WATER IN YOUR POND OR AQUARIUM! 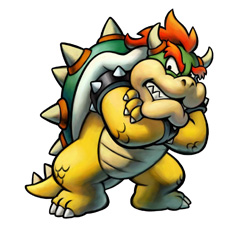 Bowser, or King Koopa, is a fictional character and the main antagonist of Nintendo’s Mario franchise. In the aquarium world, we have the King Koopa Nerite Snail! These guys are awesome and rare! Wont eat your plants, wont reproduce in freshwater, and should have a lifespan of about 3 to 6 years depending on environment. Snails shells can vary in color over time from dark brown to light golden. You can add an Iodine/Iodide supplement to your aquaruium water to acheive the best colors and vibrancy in all crustaceans and fish.

The largest specimens of this species are less than an inch across. Probably about the best algae eating snail for aquariums in the world, as they DO NOT reproduce in freshwater, but only in brackish or saltwater. More info on Reproduction below.

YES, we have them here at the nursery in our FRESHWATER pools so you need not worry about any acclimation process unless you want them BACK in Saltwater. They may lay “pretzel- salt-looking” eggs, but they won’t hatch unless the eggs are laid in, at least, brackish water at an optimum temp. Great for keeping GLASS, & PLANT LEAVES clean! NO, They won’t eat your plants either. What else could you want in a snail?

REPRODUCTION: Aquarists have not had much luck breeding these Nerites. Many species simply do not lay eggs under typical aquarium conditions, and on the few occasions where it has been reported of eg laying, only rarely have baby snails been produced. Nerites cannot reproduce without mating first, unlike the Malaysian livebearing snail.

In the wild, this species is found primarily in coastal marine habitats, in fresh, brackish, and saltwater conditions. This snail will prosper in hard, alkaline freshwater for long periods, perhaps indefinitely. In brackish conditions, this is perhaps the ideal snail for low to moderate salinity at (SG 1.003 and upwards) success is altogether more secure.