There are 4 families of freshwater fish that are considered livebearers. The Family Poeciliidae includes mollies, platies, swordtails, guppies and even mosquito fish. They are called livebearers because the females retain their eggs until they are fully developed and give birth to free-swimming fry. Over the years, livebearers have been selectively bred to create a host of different colors, body shapes and fin types. Because they tend to be peaceful, colorful and hardy they make great beginner fish and for many experienced aquarists their first aquarium fish was some type of livebearer.

Natural Habitat for Livebearers
Poecilid livebearers are native to the southeastern United States, Mexico, Central America, northern South America and many islands of the Caribbean Sea. Guppies and mosquito fish have been introduced to many parts of Asia to help control malaria causing mosquitos and are now established in virtually all tropical and sub-tropical regions of the world. They inhabit streams, rivers, pools, lakes and estuary environments.

Livebearers Water Requirements
Livebearers are native to hard, alkaline water but farm raised fish sold today will thrive in a wide range of water conditions. In nature, they are often found in brackish to full marine environments and will benefit from the addition of 1 teaspoon of non-iodized aquarium salt per gallon of water! Livebearers are top to mid-water swimmers and can be kept in aquariums of 2.5 to 20 gallons, however, larger aquariums are easier to take care of and give the fish more room to swim. They will be less stressed and show their best colors in a well planted dark bottomed aquarium with a moderate current.

Molly fish or Mollies originated in the waters of Mexico to the South American oceans. It’s not unusual to find these beautiful little fish swimming in the warm waters of Central America naturally. 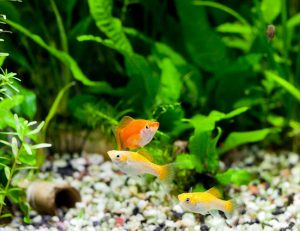 The U.S. is seeing an influx of Mollies in the lower southern gulf regions which is great because these fish offer many benefits to our eco-systems not only as algae eating fish, but also as a food source for larger predatory animals and other fish. These fish have been found in drainage systems as well as rivers that feed into the gulf waters. There are many varieties of Mollies, each with with their own distinguishing characteristics and traits.

Mollies, in general are an easy fish to raise! They are not demanding of their keepers and will live quite happily in a 10 gallon tank. Mollies have the ability to adapt to a variety of salt levels in the aquarium. With a gradual acclimation, these fish may be maintained in either a freshwater aquarium or a saltwater aquarium. In the freshwater aquarium just 1 teaspoon of aquarium salt per gallon is recommended for optimum health.

Adaptable and Easy to Care for fish!
Mollies are very adaptable to changing environments and have been seen in caves, freshwater areas and in mangroves swamps living in saltwater.

The Molly seems to thrive in salty, briny water which is why they have been found in caves. The high mineral content of cave water attracts the Molly. Mollies can be raised in pure freshwater with success, but the occasional addition of salt will prove beneficial for these and most other freshwate species.

Mollies are capable of living a long time! In the wild, they live up to 5 years. In captivity, they tend to live 3 to 5 years! So, this is a GREAT Beginner Fish! Whether you are a 1st-timer with owning fish or an expert seasoned aquarist, Mollies are hardy fish that are great to raise and care for!