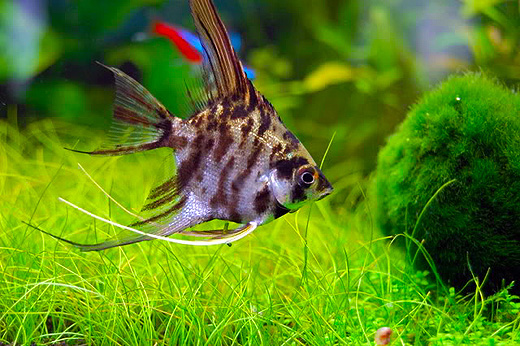 Possibly the most recognized freshwater fish in the aquarium hobby is the Angelfish belonging to the family: Cichlidae. Admired for their graceful swimming behavior, angelfish can make a stunning addition to a community aquarium.

Pterophyllum is a small genus of freshwater fish from the family Cichlidae known to most aquarists as Angelfish. Angelfish are one of the most commonly kept freshwater aquarium fish, as well as the most commonly kept cichlid. All Pterophyllum species originate from the Amazon Basin, Orinoco Basin and various rivers in the Guiana Shield in tropical South America. The three species of Pterophyllum are unusually shaped for cichlids being greatly laterally compressed, with round bodies and elongated triangular dorsal and anal fins. This body shape allows them to hide among roots and plants, often on a vertical surface. Angelfish are ambush predators and prey on small fish and macroinvertebrates. All Pterophyllum species form monogamous pairs! Eggs are generally laid on a submerged log or a flattened leaf. As is the case for other cichlids, brood care is highly developed. Angelfish are easy to care for and can live up to 10 years in captivity if they are provided with proper aquarium conditions.

Wild caught angelfish are rare in the aquarium hobby these days as most fish for sale being captive raised. Wild angelfish are generally silver or bronze with black vertical stripes, however, through selective breeding, many color patterns as well as long-finned varieties known as Veiltail have been developed over the years. Most angelfish sold in the hobby are Pterophyllum scalare, and P. altum is occasionally available. A 3rd species P. leopoldi, the smallest and most aggressive species of angelfish is a rare offer anywhere.

Angelfish Natural Habitat
Angelfish are native to a massive area of tropical South America, including most of the Amazon River system. In their natural habitat they are found almost exclusively in quiet, slow moving waters. In the wild they prefer darker waters, under overhanging vegetation or among trees that have fallen into the river, so try and mimic mother nature when building your habitat.

Water Parameters for Angelfish
Luckily, Angelfish accept a wide range of water conditions and will adapt to most conditions without special care. pH values should be between 6.8 and 7.8 with hardness between 3° and 8° dKH (54 to 145 ppm). Water temps are best kept between 78° and 84° F. If the aquarium is kept in rooms below 78°, use an Aquarium heater to increase the heat, nothing under 75 generally. Always maintain good filtration for a happy Angelfish colony!

Angelfish are generally a peaceful fish but remember they are cichlids and can be aggressive toward one another, especially when attempting to pair off and spawn. They will not hesitate to eat smaller fish. This does not mean they are aggressive, as many aquarists incorrectly believe; like most fish, they are opportunistic animals and will eat anything that fits into their mouth! Suitable aquarium mates include larger tetras, rasboras, gourami, peaceful barbs, rainbowfish, corydoras, plecos and other medium-sized catfish. Angelfish can indeed be kept with discus in larger aquariums, if the temperature is maintained above 79° F.

Food for your Angelfish.
Angelfish feed at the surface or mid-water generally, however, in nature they often forage along the bottom looking for worms and small crustaceans. So do NOT offer your tropical fish food 3 times a day like many food manufacturers instruct you to. Remember they are trying to sell you food! Your fish should not be offered food much more than about 3 times per week in a natural planted aquarium. Allow your fish to be fish! Let them clean your tank and forage like a normal animal. Angelfish are omnivores and will thrive on Tropical Flake foods, Pellets/Granules and Shrimp Pellets. Frozen, freeze-dried, and live foods can also be fed as treats or to help induce spawning. For best results rotate their diet often and feed only what they can consume in a few minutes.

Angelfish Breeding
Adult angels will pair off and spawn often. They clean a flat vertical surface on which to lay their eggs and chase other fish away. Spawning occurs with the female laying rows of eggs on the prepared surface and the male following, fertilizing them. Unfortunately, most captive angelfish have lost the rearing instinct and usually eat their own eggs.

Pterophyllum should not be confused with marine angelfish, perciform fish found on shallow ocean reefs. If you are looking for Marine Saltwater Angels, we have those too! Click here…

So much to see here! Take your time and look through our massive selection of tropical fish. We’ve been in business since 1987 and have dedicated our lives to farming and shipping aquatic livestock! If you need a hand putting together an order, just give us a call, we offer a text/cell number to professionally assist you 7-days week. THAT is personal service you won’t find everywhere! Think of it as a personal assistant while you shop!