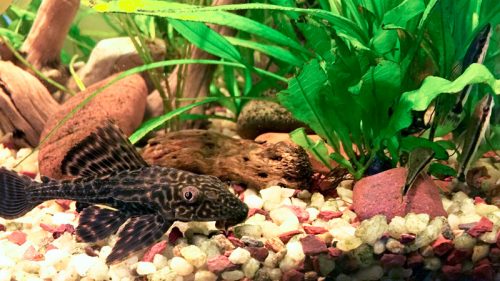 The fish commonly known as “plecos” or Plecostomus native to mostly South & Central AMerica come from the family Loricariidae, also known as the “armored catfish”. They include fish from the genera Ancistrus, Baryancistrus, Chaetostoma, Hypostomus, Leporacanthicus, Panaque, Peckoltia, Pseudancistrus and many others. They are known to many as “suckerfish” due to the shape of their body and mouth and are often sold as algae-eaters even though many of them eat little algae. In addition to the two-part scientific names used for all living things, plecos also have their own naming system that identifies them by “L-number” or “LDA-number”. Though this is not an “official” naming method, it is popular among hobbyists and collectors.

Plecos are generally flattened with a large, round head and skinnier body. The body is covered by hard plates and many have strong spines in their fins and even along the body. The mouths are on the underside of the fish and are used to rasp food from hard surfaces and to help the pleco maintain its position in the water flow.

Plecos are commonly purchased by beginner and experienced aquarists alike as algae-eaters. Most plecos actually dont eat algae or require other foods in their diet. The genera Ancistrus, Peckoltia and Otocinclus are a few common, smaller plecos that will help control algae without eating live plants. Many others are omnivores (eat both plant matter and meaty foods), carnivores (primarily eat meaty foods) or scavengers (eat whatever they can find). Some plecos, notably those from the Panaque genus, even eat wood as part of their diet.

Many plecos also get very large and their size as well as their waste production make them unsuitable for small aquariums. The very common Trinidad Pleco/Common Pleco (Hypostomus plecostomus) grows close to two feet in length. As with any other tank residents, choose plecos carefully with respect to their size, behavior and diet.